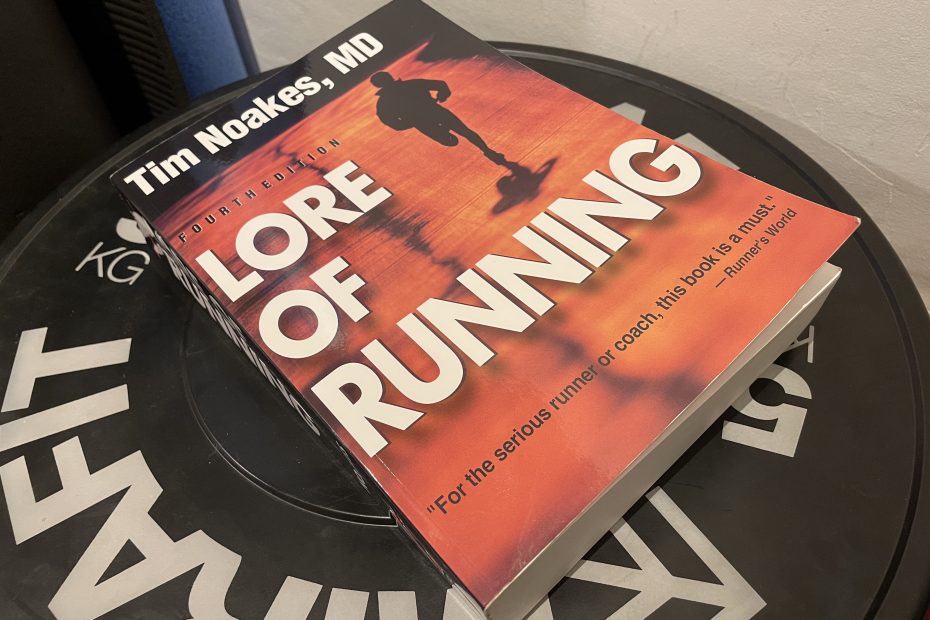 The Lore of Running

Weighing in at almost 1,000 pages, Tim Noakes’ The Lore of Running doesn’t bill itself as an airport read for the occasional Sunday runner, but crammed into its numerous pages are impressive levels of research, scientific evidence and theory about the practical application of running principles. While long distance running is the focal point of the narrative, the book casts its net wider in order to illustrate and prove out the fundamentals of performance. For example, comparisons with other cardio activities such as swimming, cycling and rowing are frequently drawn into the mix to support an exhaustive analysis of endurance sport and its effect on the human body.

Noakes is a South African professor of Exercise Science and Sports Medicine at the University of Cape Town and a lifelong runner. This book – now in its fourth edition (2002) – has been a runners’ staple since its publication in 1986 and with this level of meticulous enquiry, it’s easy to see why.

With dedicated sections on human physiology, psychology and studies on the effects of training methods, environment and genetics on performance, this tome seeks to unpick the why rather than just be another coaching alternative. Programmes from 5K through to the Ultramarathon get their own chapters too. However, these mainly reference well-trod existing programmes by Pete Pfitzinger, Jack Daniels, and Jeff Galloway, but are put into context with the author’s own personal experiences at competing at these distances over the years. It’s worth noting, however, that if you’re specifically looking for training programmes or a season plan, there’s more instructional and comprehensive offerings in the books of Daniels, Pfitzinger, etc.

The centrepiece of Noakes’ theory in this book is perhaps the ‘Central Governor Theory’ – or, to put it simply – how the function of the brain ultimately controls the point of fatigue and failure, rather than the more widely understood mechanics of oxygen delivery, consumption of stored glycogen (fuel) and build-up of lactic acid (“poison”).

Noakes reasons – with supporting data – that the mind ultimately must be conditioned or ‘trained’ as much as the flesh, as it has a more profound effect on exercise regulation than is currently factored or understood. This largely – and perhaps controversially – debunks the traditional model of the aerobic/anaerobic threshold being the defining governor.

Noakes caveats this by stating quite clearly that training in these zones and raising the threshold between them clearly works, but the currently accepted reason for this is likely to be wrong. Running intervals will get you both fitter and faster, but the critical adaptation is in reprogramming the brain to accept harder efforts before negative signals limit – and ultimately stop – exercise through fatigue.

The Lore of Running also offers a pretty comprehensive look at the training practices and experiences of runners through the ages – from the 19th Century pioneers right through to the 21st century Kenyan domination of long-distance Olympic events. This is supported by interviews and training diary outtakes from the likes of Emil Zatopek, Kip Keino, Herb Elliot, Ron Hill and many others. The perils of heavy lifetime training volumes and intensities often highlighted in these tales segues nicely into a fairly comprehensive section on injury prevention and treatment, as well as the long term health benefits and potential problems (there aren’t many, you’ll be pleased to know!) of endurance running.

All in all, a hugely impressive book that compelled me to keep reading from cover to cover. A perfect bit of brain food for a December in lockdown.

About the author
Dean is a full-time fitness enthusiast and a qualified personal trainer in Godalming, UK

If you’re looking to add speed, endurance and injury prevention to your game, contact me for a dedicated programme to complement your run